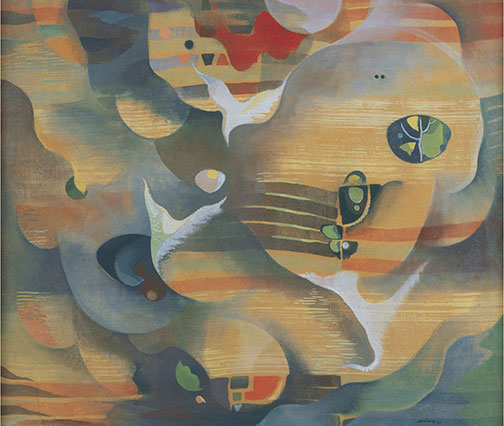 Every Monday, a Morris staff member is highlighting a piece from the permanent collection. Today, Matt Porter, curator of education, turned towards an abstract painting by Will Henry Stevens for his choice.

“Lately, at our house we’ve limited our going out, and have been taking walks in the woods nearby instead. There’s a trail near us that was supposed to be turned into a road, but never was. Like the other streets around it, they even intended to name it after a bird—it was going to be Lark Street. It’s not well maintained, and isn’t crowded. Sometimes the path is hard to make out, and we get a bit lost. On these walks, my two-year-old daughter is fascinated with everything that flies. Birds, bugs with wings, and planes are the things she looks for on these hikes. I can imagine her shouting “A bird, a bird!” upon seeing this 1944 painting by Will Henry Stevens.

Stevens was born in Vevay, Indiana, in 1881. He studied at the Cincinnati Art Academy, before being hired as a young designer for Rookwood Pottery. Rookwood sent Stevens to New York City where he oversaw the tile work being installed at the Fullton and Wallstreet subway stations. A year later he enrolled in classes at the Art Students League. Having achieved modest success and earning favorable reviews in New York, Stevens moved to New Orleans in 1921 to teach at Sophie Newcomb College where he remained on the faculty until his retirement in 1948. During the summers during his tenure, he traveled to the mountains of East Tennessee and Western North Carolina to paint and teach classes.

Aviation Abstraction is one of the works owned by the Morris that are known to have been painted in North Carolina in the 1930s and ’40s.  Like much of Steven’s mature work it reflects the influences he felt—from the work of Kandinsky and Klee to Japanese silk painting. But it is the voices of the great American transcendentalists Emerson and Thoreau that I’m reminded of when I think about this painting at this particular moment in time. As I walk through the woods, looking for birds with my daughter, I think of Steven’s saying, ‘The best thing that a human can do in life is to get rid of his separateness and hand himself over to the nature of things  . . .’

The birds aren’t hard to see. You just have to look for them.”