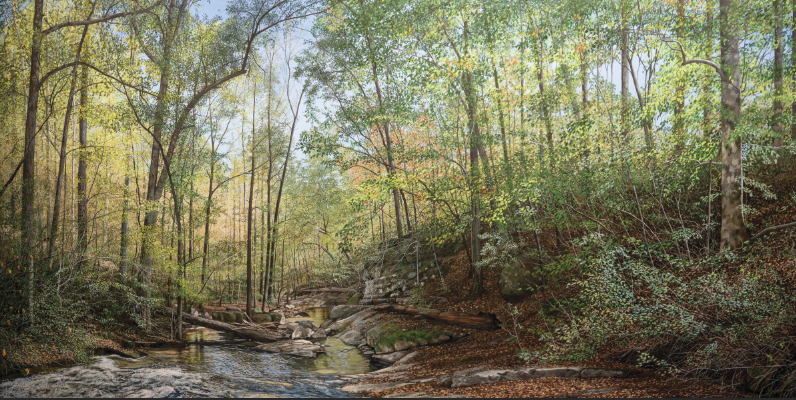 Highlighting the work of three consummately skilled contemporary artists, this exhibition addresses the distinctly different ways that each of them views the subject of landscape. They have this in common with landscape painters of the past: underlying their work are themes related as much to self-discovery and self-exploration as they are to the examination of topography.

John L. Cleaveland, Jr., earned a bachelor of fine arts degree from the University of Georgia and held a graduate assistantship in the UGA Studies Abroad Program in Cortona, Italy. His work has been widely exhibited and collected. He says that his “paintings are specific expressions of places I’ve been to that I love, that I’m connected to, or that I’m pushed to some expression by. . . . I’m looking for a feeling—something that might tell a greater truth but in a very simple way.” He lives and works in Farmington, Georgia, where he creates the epic views of the landscape that are on display here.

English-born Julyan Davis, based in Asheville, North Carolina, was trained at the Byam Shaw School of Art in London. In 1988 he traveled to the American South on a painting trip that was fueled by a keen interest in the history of Demopolis, Alabama, and the Bonapartist exiles who settled there. His work, widely exhibited, is included in many public and private collections. He is represented here by The Beidler Triptych, an offshoot of a collaboration begun in 2018 with the South Carolina poet Glenis Redmond that was inspired by the legend of the cymbee, a water spirit, hidden in the swamps and springs throughout the Lowcountry.

Philip Juras earned a bachelor of fine arts and master of landscape architecture degrees from the University of Georgia. His MLA thesis examined grasslands that flourished in the Southeast before European settlement, a subject that continues to inspire his artwork. He lives in Athens, Georgia, where he explores the rich aesthetics of a wide range of ecologically intact natural environments. He is here represented by several of his “burn paintings,” the result of his direct observation combined with study of the natural science and history of the place depicted.

The exhibition is accompanied by a fully illustrated catalog.