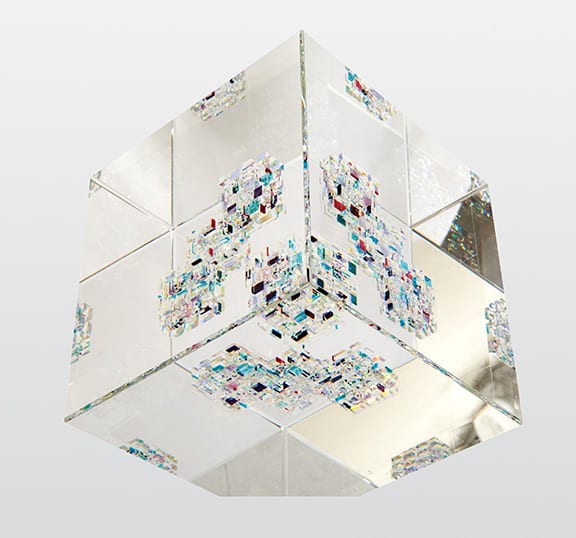 The history of the studio art glass movement in America is relatively brief. Its origins can be pinpointed precisely to two workshops conducted by ceramist Harvey Littleton, who was interested in the potential of glass as an artistic medium, and chemist and engineer Dominick Labino held at the Toldeo Museum of Art in 1962. Littleton had envisioned a more or less traditional studio space in which individual artists could design and execute their own finished works of art in glass on a small scale. Labino was instrumental in the design and manufacture of a small furnace in which glass could be melted, fused, and fashioned into art. (Up until then, most glass artwork—such as that of Louis Comfort Tiffany—was created by a designer but executed in industrial manufacturing settings.) After those workshops, Littleton returned to the University of Wisconsin, where he taught, and started a glass program within the school’s Ceramics Department. Some of his earliest students—Dale Chihuly, Marvin Lipofsky, and Fritz Dreisbach—became the pioneers of the modern movement.

Despite its humble origins, the studio glass movement is arguably one of the most important advancements in the world of contemporary art. Many of the most important artists of the studio glass movement are represented in the remarkable collection that was assembled by the late Eugene Fleischer. A man of many enthusiasms (and almost as many collections), he pursued the best examples by the best glass artists with ardor and energy and built an important collection that he bequeathed to the Morris Museum of Art. Much of it is on display in the museum’s newest permanent collection gallery, beginning in late September.