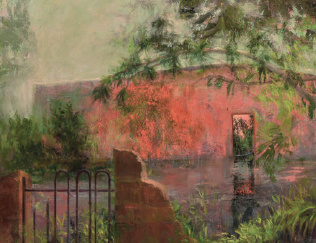 Charleston, South Carolina, artist Linda Fantuzzo began painting at age twelve. She studied painting and graphics at the Pennsylvania Academy of the Fine Arts in Philadelphia from 1968 to 1973 before moving to Charleston, where she set up a studio in 1974. She was influenced to do so by fellow graduate student Manning Williams, a native Charlestonian who was already an established artist there, and his wife, journalist Barbara S. Williams. (Manning Williams’s masterpiece Jack Island Trials will be the subject of an exhibition at the Morris beginning November 4.)

She produced nonobjective work for more than ten years before returning to realist painting, producing landscapes, interiors, structures, and still lifes. No matter the subject, it is really the quality of light and atmosphere permeating her work that is her principal interest. A full-time studio artist, she has also been an active leader in South Carolina’s arts community for years, serving on review panels for the state’s Arts Commission and for the Advisory Board of the Halsey Institute for Contemporary Art at the College of Charleston School of the Arts. She has been a juror for Charleston’s City Gallery at Waterfront Park, the Charleston Artist Guild, the Saul Alexander Gallery at the Charleston County Public Library, and many other arts institutions and programs in South Carolina. In 2000 she cocurated the exhibition Sehnsucht: The Art of Pati Croffead, and in 2002 she was the project director for Larger Than Life: A Second Story Show, sponsored by the City of Charleston Office of Cultural Affairs and featured at Piccolo Spoleto.

Her work has been seen in many solo exhibitions and is in the collections of the Greenville County Museum of Art, the Gibbes Museum of Art in Charleston, the State Art Collection of the South Carolina Arts Commission in Columbia, and the Franklin G. Burroughs-Simeon B. Chapin Art Museum in Myrtle Beach, South Carolina, as well as in other public, private, and corporate collections throughout the United States and Europe.

The works in the present exhibition are all rendered with quiet simplicity, while the inclusion of stairs, ladders, windows, and doors in many of them suggests an invisible, but palpable, human presence. The title Penumbra refers to light’s transitions to the shaded area created by an object. As Linda Fantuzzo has written in an artist statement, “Light—bright, low, or poetic—can imbue the image with a feeling that something has happened, or, will momentarily occur.”