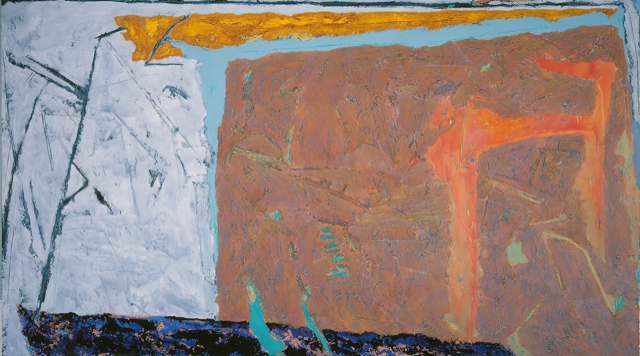 It’s Morris Staff Pick Monday! Brooke Shivers chose a piece by Herb Jackson. “Many abstract artists experiment with texture, but I’ve never seen a technique like Herb Jackson’s. His use of pumice and mica in some works gives the paint a spongy texture, and he finishes certain areas with iridescent and pearlescent pigments. I’ve wondered for years why his painting ‘RA’ affects me so strongly. I think it may have something to do with discovering the wonders of nature. Like many children, I loved to dig in the dirt, collect rocks and bugs, and scrutinize the shimmering petals of flowers in the sun. Jackson’s textures and finishes recall similar things in nature—the grit of sand or sparkling flecks in rocks that are so magical to a child. He manipulates colors on his canvases by adding layers and then revealing buried ones by scraping and excavating. ‘Shapes and marks come and go as the painting develops to a hundred or more layers. The final outcome is the result of a process of discovery similar to the life experience itself.’ (https://buff.ly/2XXRbMC.) When standing in front of his works, I am absorbed in the love of creation, discovery, and experimentation that represent, to me, pure expressions of childhood and a passion for nature.⠀
⠀
In 1962, as a teenager, Jackson won his first award for art in a juried exhibition at the North Carolina Museum of Art in Raleigh. After receiving a master of fine arts degree from the University of North Carolina at Chapel Hill, he taught art at Davidson College in Davidson, North Carolina, until retiring in 2011. His work is now in more than one hundred public Collections, including the British Museum in London and the Brooklyn Museum in New York. (From https://buff.ly/3bv1igc.)
⠀
‘My inner journey through art confirms, for me at least, that it is not necessary to rob life of its mystery in order to understand it.’”—Herb Jackson