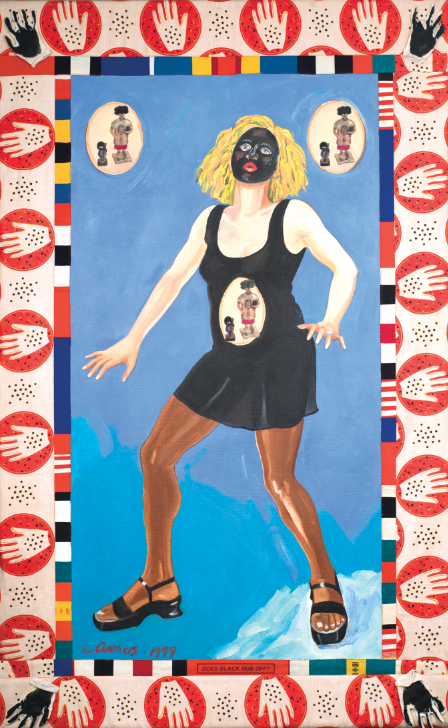 Emma Veoria Amos (1937-2020) was a prolific painter, printmaker, and weaver whose work has explored the intersection of race, class, gender, and privilege in both the Art world and society at large.⠀⠀
⠀⠀
Does Black Rub Off? is a commentary on issues of race and gender. In the center is a blonde-haired woman in an animated pose wearing blackface. The inner border of the painting is an example of Amos’s frequent use of African textiles, and on an outer border of cloth are images of white minstrel gloves. A white glove, painted black, has been stitched into each corner. The gloves eerily echo the hands of the women, whose fingers are spread apart as if performing. Although she wears a simple black dress, her stance and blackened face mimic a minstrel performer. An oval with two small figurines of black stereotypes appears on her dress and on either side of her head. As she does in this painting, Amos sometimes paints figures with multicolored skin to illustrate the superficiality of racial difference. The painting’s title is unclear: does the term “black” refer to the woman’s blackface or to a construct of blackness as defined through popular culture? (Essay by Shawnya L. Harris for “The Morris at 25”.)⠀⠀
⠀⠀
Image: Emma Amos, Does Black Rub Off?, 1999. Oil on linen canvas with fabric borders and photo transfers. (copyright symbol) Emma Amos. Morris Museum of Art, Augusta, Georgia. Gift of the American Academy of Arts and Letters, New York: Hassam, Speicher, Betts, and Symons Funds, 2003. | #morrismuseumofart #augustaga #loveaugusta #thesouth

Create with Me! Monster Mash.