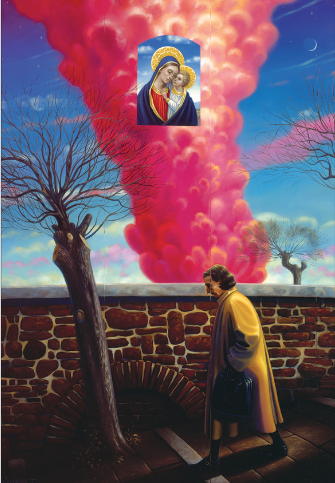 Born and raised in Arkansas, Rowlett earned his master of fine arts degree in painting and drawing from the University of Georgia in 1995 and remained in Athens until 2003, when he embarked on a four-year sojourn, living, painting, pondering, and teaching in Nova Scotia, Brooklyn, the Hudson River Valley, Nashville, and Cortona, Italy. He returned to Athens in 2007 and has lived and worked there ever since.
To understand Terry Rowlett’s oil paintings is to take a glimpse into his life’s journey from its evangelical roots in the Ozarks to hipster-bohemian Athens. As a young man, he studied in Italy, where he found his technique, format, and the inspiration for his storytelling. To this day, his principal concerns remain man, nature, God, and the relationship of one to another.