Messages from Home: The Art of Leo Twiggs 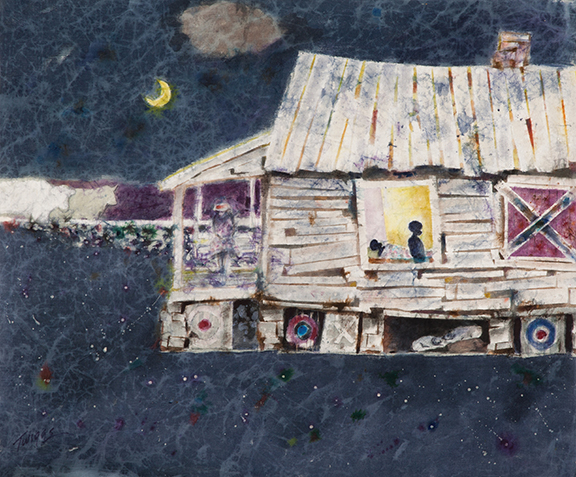 Now eighty-six, Dr. Leo Twiggs, regarded for many years as one of South Carolina’s most important artists, is a native of Saint Stephen, a small town north of Charleston.

The first member of his family to attend college, he matriculated at Claflin University in Orangeburg, South Carolina, where he majored in art, English, and history. After earning his undergraduate degree in 1956, he studied at the School of the Art Institute of Chicago and received a master’s degree from New York University. In 1970 he became the first African American to earn a doctorate in art education from the University of Georgia.

At South Carolina State College (now University) he established the first art department and was instrumental in developing SCSC’s I.P. Stanback Museum. He was chair of the art department and the first executive director of the museum from 1980 until his retirement in 1998. He was named professor emeritus in 2000.

After his time at the School of the Art Institute, Twiggs began experimenting with batik as a principal medium. Since then his batik paintings have achieved international recognition.

In 2004 the Georgia Museum of Art organized a retrospective exhibition of his work that toured the Southeast. An award-winning book about his life and career, Messages from Home: The Art of Leo Twiggs, was published by Claflin University Press in 2011. The University of South Carolina awarded him an honorary doctorate in fine arts in 2013.

In 1981 Twiggs was the first visual artist to win the Elizabeth O’Neill Verner Governor’s Award for the Arts from the South Carolina Arts Commission; in 2017 he won the Verner Award for lifetime achievement. In 2018 the Gibbes Museum of Art in Charleston awarded him its prestigious 1858 Society Prize for Contemporary Southern Art. (He was the first South Carolina artist so honored.) Twiggs was the 2019 recipient of the Larry D. and Brenda A. Thompson Award from the Georgia Museum of Art.

His paintings are in numerous public and private collections, including those of the Gibbes Museum of Art, the Mint Museum in Charlotte, the Columbia Museum of Art in South Carolina, and the Smithsonian National Museum of African American History and Culture in Washington, D.C.