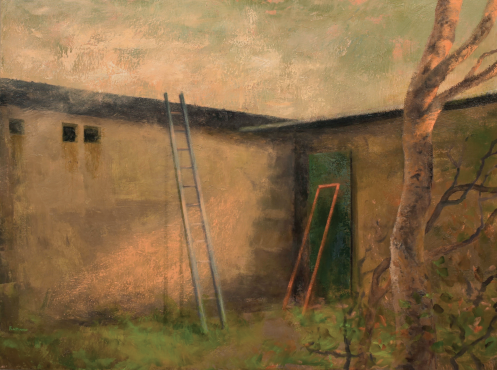 Particularly well known for capturing the mysterious qualities of light on canvas to create atmosphere, mood, and narrative, artist Linda Fantuzzo is represented here by a new body of work she calls Penumbra. These landscape and interior paintings and drawings are rendered with a quiet, abstracted simplicity. Stairs, ladders, windows, and doors suggest an unseen yet palpable human presence. Penumbra is a term that means “a partial shadow,” and in these works Fantuzzo connects transitions of light to the metaphorical transitions and impermanence of the human experience.

Fantuzzo grew up in Endicott, New York, and studied painting at the Pennsylvania Academy of the Fine Arts in Philadelphia before settling in Charleston, South Carolina, in 1974. While she was studying at PAFA, she met Charlestonian Manning Williams, Jr., a well-established painter who was seeking more art education there. She later visited Charleston and fell in love with the city, where she’s lived and worked ever since.

Her art has been featured in numerous exhibitions throughout her long career and is in the collections of the Greenville County Museum of Art, South Carolina; the Gibbes Museum of Art, Charleston; and the Burroughs-Chapin Art Museum, Myrtle Beach, as well as additional public, corporate, and private collections throughout the U.S. She has received multiple grants and awards, including the South Carolina Arts Commission’s Individual Artist Fellowship in the visual arts in 2017.