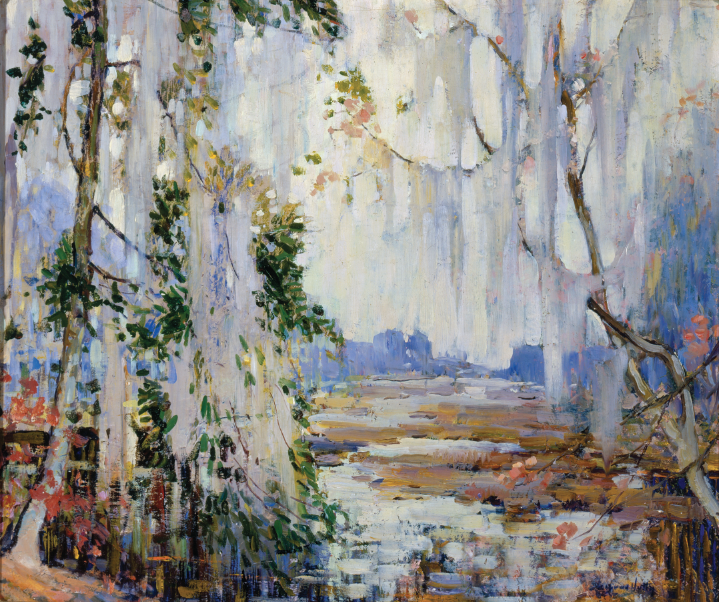 One of the principal artists of the Charleston Renaissance, Alfred Heber Hutty (1877–1954) was a native of Grand Haven, Michigan. He spent most of his youth in Kansas City, where his innate artistic abilities led to a scholarship at the then-new Kansas City School of Fine Arts when he was only fifteen. Later, he was employed as a glazier and that led to his pursuit of stained-glass design, initially in Kansas City, later in St. Louis, and finally In New York City, where he was employed by the Tiffany Studios. He studied with Birge Harrison at the Art Students League and at the nascent art colony in Woodstock, New York, where he was among the first artists to settle full time.

After service during World War I, Hutty visited Charleston, South Carolina, for the first time, a visit that, legend has it, prompted him to send a telegram to his wife: “Come quickly, have found heaven.” He began dividing his time seasonally between homes and studios in Woodstock and Charleston and soon became a fixture in Charleston’s art circles. From 1920 to 1924 he was the director of the Carolina Art Association (now the Gibbes Museum of Art), and in 1921 he was a founding member of the Charleston Etchers’ Club. His principal subject, the local scene, naturally led to an interest in historic preservation. The Society for the Preservation of Old Dwellings, among other groups, provided opportunities for artists—among them, Hutty, Alice Ravenel Huger Smith, and Elizabeth O’Neill Verner—to create work that was deeply rooted in Charleston’s past.

Hutty’s contributions to the cultural vibrancy of his adopted home were recognized in the city’s daily newspaper: “Charlestonians cannot do as much for this brilliant artist as he has lovingly done for Charleston.” He is represented in the Morris Museum’s collection by nearly fifty works of art—paintings, watercolors, etchings, drawings, and one of the very few pieces of sculpture he made.